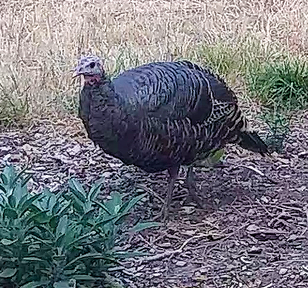 We have a tremendous number of wild turkeys here in southern Oregon.
You will see them everywhere.
We have a friend - about 25 miles up the road in Roseburg -
who lives in a fairly densely populated suburban area.
Yet, there are turkeys in the streets and everywhere.
He chases them away because he does not like them pooping in his driveway.
A large flock of wild turkeys can make quite a mess.

But some folks like to feed them.
And when a large flock begins to feel comfortable
hanging around​ like they own the place,
well, that can spell trouble. 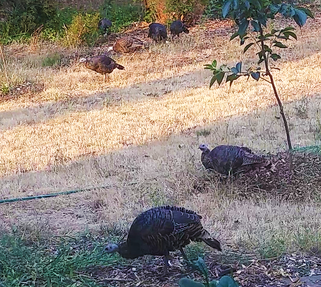 Let's talk turkey
There's a couple of things you may not know about wild turkeys.
They don't have teeth. So their digestive system requires something called grit.
Grit is basically small gravel and pebbles that they eat.
Not too flavorful but it does the trick to break down seeds
and other tough, fibrous food that they swallow whole.

So that's one thing.
The other thing is that a lot of people tend to believe that turkeys cannot fly.
They are big, lumbering birds, sort of prehistoric-looking,
so maybe the presumption is
they're not evolved far enough along yet to fly.
But the fact is that they are superb flyers.
At night, they roost way up in the treetops.
How'd they get way up there?
Yep. You guessed it.

Got shingles? (not that kind of shingles)
Okay, now we need to talk about roofs for a minute so this story can come together.
We used to live in Las Vegas, and in the southwest,
just about every house has a tile roof.
But here in southern Oregon, almost every house has a composition shingle roof.
It's designed to resist sun damage so the base layer of the shingle
is embedded with a highly reflective, gritty gravel-like material.
​You probably see where this is headed.

Turkeys on my roof
Well, they didn't actually get on our roof, fortunately.
They got on my neighbor's roof.
Ron, we will call him.
Ron and his wife liked to sprinkle bird feeder seeds and nuts
around the backyard for the turkeys.
It's not that unusual here in southern Oregon.
They enjoyed watching them.
And a variety of wildlife, including wild turkeys,
adds a certain touch of ambiance
​to the country cottage lifestyle package.
Everyone knows that.
And they didn't mind that much
that a large flock of wild turkeys was roosting up on their roof.
Only they weren't roosting.

After a couple of weeks or so, they noticed that their pet turkeys
seemed to be spending a lot of time up on the roof.
It was about at that point, Ron started wondering what was going on up there.
Like a good pilgrim, one fine morning in September,
he put the ladder on the side of the house
and climbed up to take a gander top-side.
Good thing too.

So what were they doing up there?
They were scratching and clawing and pecking the roof to shreds - wild turkey style.
​Peck. Peck. Peck.

Live and learn
Well, live and learn. Wild turkeys can literally eat your roof.
Anyway, Ron says the whole thing about your country cottage
having ambiance and a diverse wildlife population...
That's all highly over-rated.

And just one final footnote.
The actual damage to the roof was total.
It had to be completely replaced.
Cost of the new roof: $6,000.
​Peck. Peck. Peck.

My personal comment to Ron and his wife:
Hummingbirds are very nice to watch
​and they don't eat much.
​